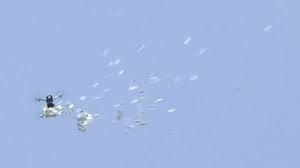 In what appears to be a political stunt by cannabis activists in Israel, a civilian drone buzzed around city streets, dropping hundreds of bags filled with marijuana.

The bizarre incident took place on Thursday afternoon over Rabin Square, a large public city square in the center of Tel Aviv, resulting in dozens of people storming the streets to pick up free weed.

Ahead of the drop, Green Drone, a pro-legalization group, responsible for operating the drone, published a message on cloud-based instant messaging platform, Telegram, saying:

"The time has come... Is it a bird? Is it a plane? No, it's the Green Drone sending you free cannabis from the skies."

The message also detailed how Green Drone is launching a new delivery service in Tel Aviv called "rain on cannabis:"

"We're launching the 'rain of cannabis' project, that will include a weekly delivery to different parts of the country of 1 kilo of cannabis divided into free 2 gram bags," the message stated.

Shortly after the drop, Israel Police arrested two men who were allegedly piloting the drone. Police said the baggies were stuffed with "a dangerous drug" and that officers managed to recover some of the baggies.