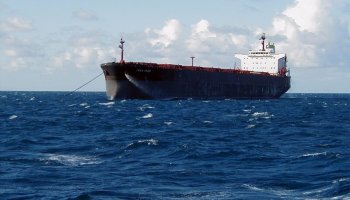 The gasoline at one point was suspected of heading for Venezuela in violation of US sanctions.

The gasoline originated in Panama, and the company that chartered the ship officially was to send it to Aruba. The ship's owner, however, said they thought the ship was going to transfer the gasoline off-shore to a ship operated by the Venezuelan oil company.

That would have potentially put the ship owner in breach of U.S. sanctions, according to the legal complaint. On March 31, the owners told the charterer through brokers, "Owners WILL NOT participate in any illegal trading," according to the complaint.

The ship's owner feared the US would come after him if that happened, and took the ship to Houston. They subsequently seized the gasoline and put it up for auction. The court ruling today just affirmed that the ship's owner was allowed to take the gasoline, and to sell it.

The ship's owner, Brujo Finance Company, began to suspect the cargo would ultimately end up in Venezuela soon after the Alkimos was chartered by Sea Energy Company Inc. to carry gasoline from Panama to Aruba.

The shipowner discovered the charterer intended to transfer the cargo onto another vessel, the Beauty One, which had been on service for Venezuela's state oil company PDVSA in the past year.