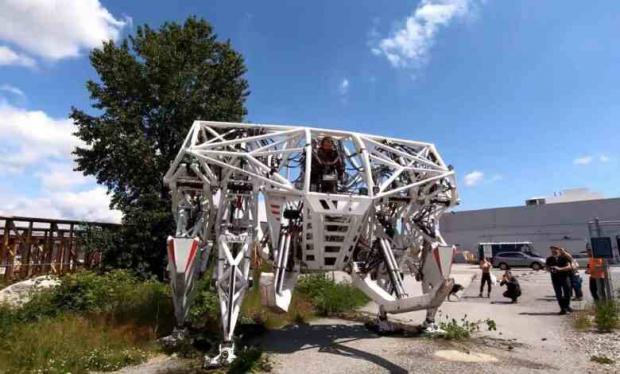 We first saw the design back in 2014. It's a 4,000-kg (8,820-lb), 4-meter (13-ft)-tall, chromoly steel-framed monster that uses some 170 kW (225 hp) worth of electric motors, hydraulics, springs and suspension units to move its four giant legs individually in response to the movements of a pilot's limbs.

If you get good enough at driving it, the Prosthesis can rumble along at up to 30 km/h (18.6 mph), or lift up and destroy small cars with its beefy metal tusks. It can rear back on its hind legs and pound the ground like a giant sumo wrestler. And yes, it can fall clean over too, because there's no self stabilization, gyroscopes or ECU control going on. Your balance is the mech's balance.

Indeed, the suit is designed to act purely as an extension of the wearer's body. Within its range of motion, its outer legs do what your arms do, its inner legs do what your legs do. Thanks to a feedback loop, if it encounters an obstacle that stops one of its limbs from moving, you feel it in a tactile sense, because you simply can't move your limb any further.

The Prosthesis team's eventual goal is to get some sort of race event happening, where pilots could guide these things through obstacle courses in head-to-head competition. But in order to do that, they need two things: money, and pilots.