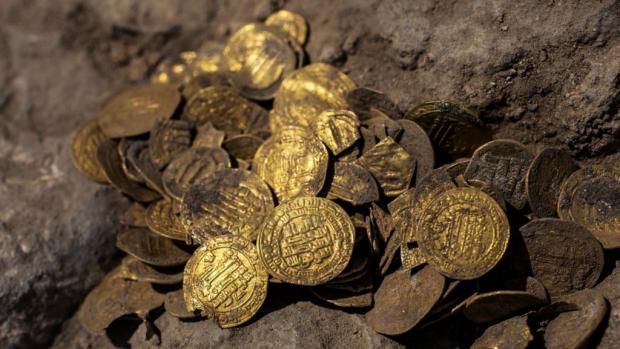 Teenage volunteers have unearthed a trove of early Islamic, 24-carat-gold coins during an excavation near the city of Yavne in Israel's central district.

Dating back to the Abbasid period around 1,100 years ago, the collection of 425 coins is an 'extremely rare' find, Israel Antiquities Authorities experts said.

The trove also included hundreds of smaller clippings, made from other gold coins, that would have served as smaller denominations of currency.

Stashed away within a clay vessel, the coins were discovered at the site — which is to be built into a new neighbourhood — on August 18, 2020.

'The person who buried this treasure 1,100 years ago must have expected to retrieve it and even secured the vessel with a nail so that it would not move,' said excavation director Liat Nadav-Ziv.

'We can only guess what prevented him from returning to collect this treasure.'

The treasure trove was hidden by its mysterious owner in an area that, during the Abbasid period, is understood to have been populated by workshops.

Mysterious painting of a PIG dating back 45,500 years is found