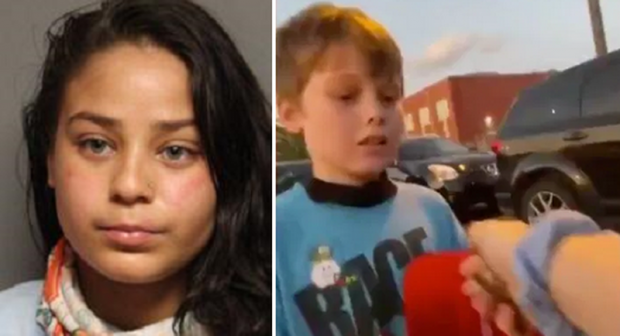 Two women who stole a 7-year-old boy's MAGA hat outside the DNC Convention in Milwaukee last week and assaulted his mother have been arrested on robbery charges.

As we previously highlighted, 7-year-old Riley and his mother Abbey were confronted by a pair of female Joe Biden supporters as they waited outside a restaurant.

The clip shows the two women tearing up signs belonging to Abbey as they admit they are destroying her property but "don't give a fuck" before swiping the hat from the boy.

Despite Riley's tears and his mother's protests, the women refuse to return the hat and subsequently violently assault Abbey before throwing the hat over a fence.

The video of the incident went viral on Twitter, garnering over 5 million views.

Moments ago outside of the DNC convention, Joe Biden supporters attacked a 7 year-old boy.

He was attacked simply because he wore a @realDonaldTrump hat.

His name is Riley.
Watch it happen.
Listen to him cry.

Will Joe condemn this violence against Children?

Before the confrontation over the MAGA hat, the two women were also caught on camera throwing a coffee at Trump supporter Katie Daviscourt, who has vowed to file charges.

Right before these two @JoeBiden supporters ASSAULTED 7-year-old Riley outside of the DNC National Convention, they threw coffee at me when I questioned them about President Trump.

Charges will be filed! pic.twitter.com/jQuo4NAEzx