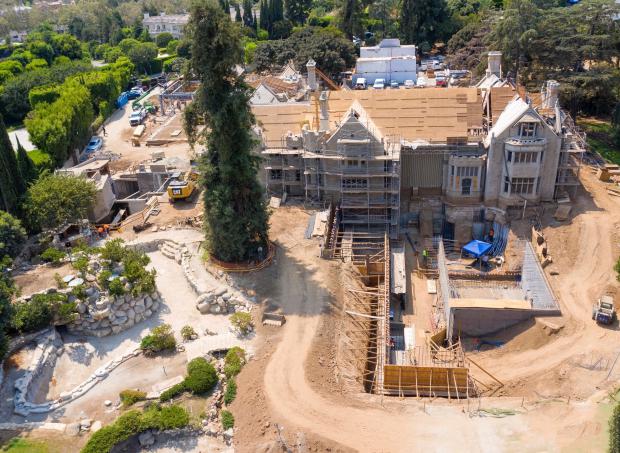 New aerial photos have captured the massive scale of the renovation works being carried out on the former Playboy mansion.

The 29-room Holmby Hills mansion, which was owned by Playboy Enterprises, was sold to billionaire Daren Metropoulos in 2016 for $100million but Hefner was allowed to stay in the house until he died in 2017.

Renovations on the former Playboy mansion began last year when Metropoulos filed permits to begin working on the property.

When Metropoulos took on the building he promised to maintain its iconic exterior, but new pictures have revealed just how large the scale of work being done is on the grounds of the property.

In one picture roof has started to be installed on the middle section of the property, while wooden beams provide support along other sections of the roof.

Scaffolding now surrounds the entire mansion while a digger and flatbed truck are also seen working on the grounds.

A snap from behind the mansion shows foundations have been dug into the ground and the infamous grotto remains drained of water.