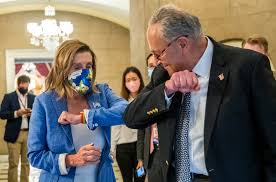 Specifically, we said that  "we are confident it is only a matter of time before Congress announces a "major deal", one which sees US debt explode higher by several trillion, sends the dollar sliding more and pushes gold to new all time highs."

As a further reminder, absent a new fiscal stimulus, US compensation would collapse from its recent sugar high, to levels last seen two years ago which would crater US GDP with just weeks to go before the November election.

Well, just a few minutes later it appears that we are well on the way to a compromise, because according to Politico, Pelosi said that Democrats are willing to cut COVID-19 demands "in half" to get agreement on stimulus bill.

And since Pelosi had previously come down to about $2 trillion, this suggests that the Democrats' new ask is around $1.5 trillion, while the GOP remains at around $1 trillion.

Considering that last week Goldman Sachs' chief political analyst predicted that the final deal would be somewhere in the $1.5 trillion ballpark, and since Trump has more to lose than to win by not signing a deal ahead of the election - as failure to compromise would send the broader economy into the abyss once more just ahead of the elections - we expect that the theater over the latest round of fiscal stimulus is almost over and within days if not hours, Dems and Republicans will announce a "deal" for a new fiscal stimulus round of just around $1.5 trillion, one which the Treasury has already largely factored into its debt budgeting needs for the current and coming quarter.