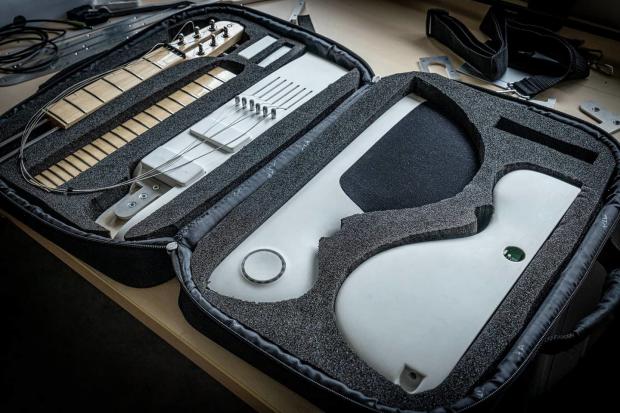 France's Reveho is also taking the crowdfunding route to production for the Slite collapsible travel guitar, which can be packed down into a 18 x 11 x 4-inch (45.5 x 28 x 10-cm) travel case.

The first Slite prototypes were built for student science and innovation competitions by Alexandre Albisser, where he got to present his design on the international stage in Hong Kong. Five years later he launched Reveho with Lucas Charron and his brother Mickaël, and now the startup is preparing the instrument for a Kickstarter due to launch on September 9.

The guitar is made up of five main components – an aluminum middle core with a wood spine, plastic upper body, plastic lower body, and two maple neck parts. All the components slide together to form a futuristic-looking single-cut guitar, with assembly reckoned to take just 20 seconds. Alexandre Albisser told us that "once the instrument is assembled, connectors embedded in the junctions allow analog and digital signals to communicate between the different parts."

The strings run from the open headstock to a fully adjustable, odd-looking bridge and down into the middle core. A coiling system looks after the strings when the instrument is collapsed in the case, but a string tensioning system brings them to tune when assembled – though temperature and humidity variations might make small manual corrections necessary.