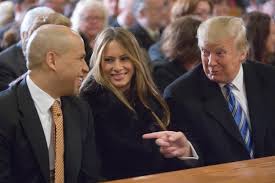 Senator Cory Booker accused President Donald Trump of racism on Wednesday for his claim suburban women would vote for him because he ended a low income housing program and trolled the president with a jab at his spelling error.

Trump claimed in an early morning tweet 'suburban housewives' would vote for him because they didn't want low income housing in their area and warned them rival Joe Biden would put Booker in charge of such programs.

He misspelled the senator's name, adding an 'e' so it read 'Corey.'

Booker tweeted back at him: 'Donaled, your racism is showing. -Cory.'

'The "suburban housewife" will be voting for me. They want safety & are thrilled that I ended the long running program where low income housing would invade their neighborhood. Biden would reinstall it, in a bigger form, with Corey Booker in charge!,' the president wrote on Twitter.

Republicans have focused their efforts on courting suburban women in recent elections, dubbing them everything from 'soccer moms' to 'security moms' to 'Walmart moms' - although in 2018 the party saw such voters shift to Democrats.

Trump DOMINATED The Debate Leaving Biden Looking WEAK Most Of The Time,