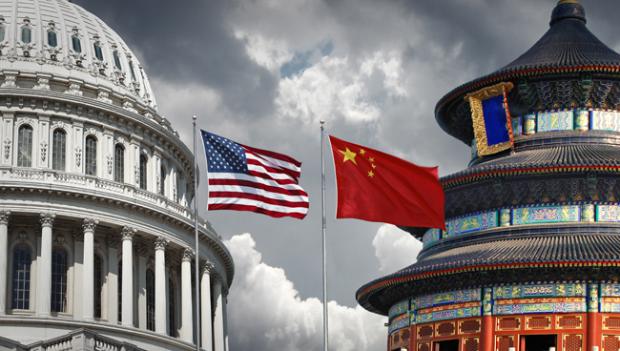 If we step back from the details of daily headlines around the world and try to make sense of larger patterns, the dominant dynamic defining world geopolitics in the past three years or more is the appearance of a genuine irregular conflict between the two most formidable powers on the planet - The Peoples' Republic of China and the United States of America. Increasingly it's beginning to look as if some very dark global networks are orchestrating what looks to be an updated rerun of their 1939-1945 World War. Only this time the stakes are total, and aim at creation a universal global totalitarian system, what David Rockefeller once called a "one world government." The powers that be periodically use war to gain major policy shifts.

On behalf of the Powers That Be (PTB), World War II was orchestrated by the circles of the City of London and of Wall Street to maneuver two great obstacles - Russia and Germany - to wage a war to the death against each other, in order that those Anglo-Saxon PTB could reorganize the world geopolitical chess board to their advantage. It largely succeeded, but for the small detail that after 1945, Wall Street and the Rockefeller brothers were determined that England play the junior partner to Washington. London and Washington then entered the period of their global domination known as the Cold War.

That Anglo-American global condominium ended, by design, in 1989 with the collapse of the Berlin Wall and the disintegration of the Soviet Union by 1991.

Around this time, with the onset of the Bill Clinton presidency in 1992, the next phase– financial and industrial globalization– was inaugurated. With that, began the hollowing out of the industrial base of not only the United States, but also of Germany and the EU. The cheap labor outsourcing enabled by the new WTO drove wages down and destroyed one industry after the next in the industrial West after the 1990s. It was a necessary step on the path to what G.H.W. Bush in 1990 called the New World Order. The next step would be destruction of national sovereignty everywhere. Here the USA was the major obstacle.

China is Spying on Millions of People. And They Aren't in China