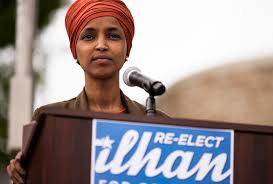 But just last night in Minnesota, following the primary victories of her fellow "Squad" members AOC & Rashida Tlaib, ilhan Omar, possibly the most controversial member of the bloc of progressive lawmakers (a bloc that looks set to expand in the next Congress with the prospect of a few new additions from New York State and elsewhere), has won the Democratic Primary in her Minneapolis District, practically guaranteeing her reelection in the fall.

Omar, one of two Muslim women in Congress, defeated fellow progressive and political newcomer Antone Melton-Meaux and three other candidates to win with more than 60% of the vote, wider than her margin of victory last time.

Melton-Meaux, a lawyer with no previous experience in electoral politics, mounted a strong challenge, raising $4.1 million, nearly as much as Omar herself. He also accused Omar of tending to her national reputation, and leaving behind the people of her district. However, the killing of George Floyd in Minneapolis - Omar represents a chunk of the city - helped supercharge her campaign, allowing her to beat back accusations of anti-semitism.