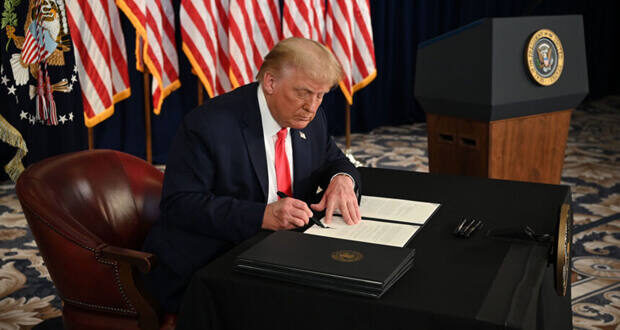 The president signed a combination of an executive order and memorandums on Saturday which aim to send financial relief to unemployed people in the United States, protect people from evictions, offer student loan relief, and defer payroll tax payments.

Trump, speaking from his golf resort in Bedminster, New Jersey, declared that each unemployed person will be given $400 weekly. However, that's $200 less than what the previous benefits provided, which expired in July. Democrats sought to provide the same amount to those who qualify for it.

"The third action I'm taking today will also provide additional support for Americans who are unemployed, due to the China virus. Under the CARES Act I proudly signed, I expanded unemployment benefits into law," he said.

Through the executive action, he also seeks to suspend payments on some student loans, protect renters from evictions, and allow employers to defer payroll taxes through the end of the year for employees who make less than $100,000. Payroll taxes fund Social Security and Medicare.

"If I'm victorious Nov. 3, I plan to forgive these taxes and make permanent cuts to the payroll tax and to make them more permanent," Trump said.

To Trump Aides: You Have no Idea How deep the CDC Scandals Go

More Than One Third Of All NYC Residents Consider Leaving

Stocks Drop To Session Lows After Pelosi Says She Is Sticking To $2.2 Trillion In...

Peter Schiff: When Exactly Are They Going To Deal With The Debt?