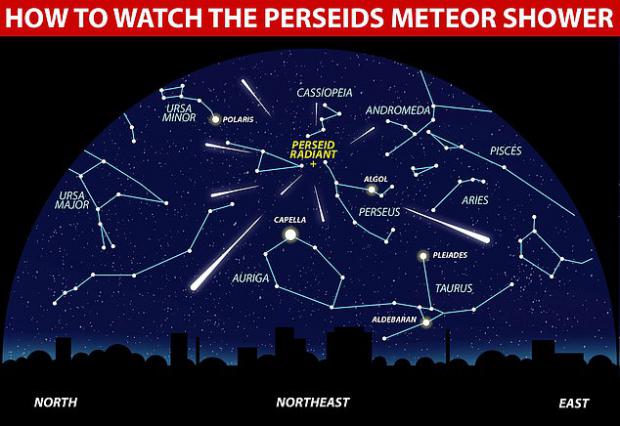 The shower actually started in mid-July but won't reach its full illumination until the Earth passes through the bulk of the debris between August 11 and August 13.

The event is one of the high points in the celestial calendar, particularly for the northern hemisphere with up to 100 shooting stars an hour filling the sky

The meteors, mostly no bigger than a grain of sand, burn up as they hit the atmosphere at 36 miles per second to produce a streak of light.

The meteors are known as the Perseids because they seem to dart out of the constellation Perseus, and can be seen with the naked eye anywhere in the world.

If skies are clear, the Perseid meteor shower should be visible across the UK from around midnight until 5.30BST, according to Royal Museums Greenwich.

The celestial show will be visible both north and south of the equator, although those in mid-northern latitudes will be treated to the best views.

This means the United States, Europe, and Canada will be able to see the Perseids at their best, according to astronomers.

Stellar views of the meteor shower will also be visible from Mexico and Central America, Asia, much of Africa, and parts of South America.

Lunar Crater Telescope Would Be Ten Times the Area of Arecibo

T-cells Are the Superstars in Fighting COVID-19 --

The Intertwined History of Myelitis and Vaccines