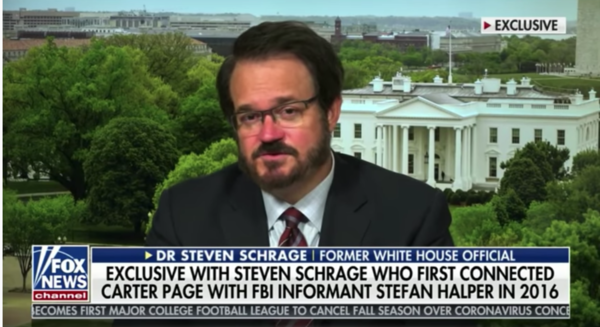 On May 19, 2018, this realization blindsided me in London as I was about to fly out for my wedding. The New York Times, NBC News and other sources had outed my PhD supervisor, Stefan Halper, as a spy known to the UK's MI6 intelligence service as "The Walrus."

It didn't seem real. Could a former professor I once trusted as a mentor have betrayed his word, profession, and country to start these disasters? I had moved to England to pursue an academic career and leave DC's politics behind, only to have my PhD supervisor throw me back into the most outrageous political firestorms I could imagine. Just my luck. Then an even worse question began nagging at me. Did I unintentionally light the match that started it all?

As I started to piece together what happened over the next few months, I realized something. The stories that The New York Times, Washington Post,and others were pushing didn't add up. Many seemed planted to cover up or advance the agendas of several individuals whose tentacles secretly ran through these scandals, and who each had longstanding ties to intelligence services like the FBI, CIA, and MI6. I call these individuals the Cambridge Four.

Strangely, all four were linked through that sleepy British academic town thousands of miles from the alleged "ground zeroes" of Russiagate's conspiracies, Moscow and DC. In addition to the central "Spygate" figure Halper, they include the central source of "Russiagate's" fake conspiracy theories, Christopher Steele; former MI6 Director Sir Richard Dearlove; and Halper's and Dearlove's partner in a Cambridge Intelligence Seminar linked to titillating — but false — tales of a "Russian spy" seducing Trump's top national security advisor. My years of work with Halper provided an inside view of how their four networks interconnected. The more I dug up new pieces of this puzzle, the more I saw how these individuals' seemingly separate acts might fit together in an absurd picture of how these scandals really started.