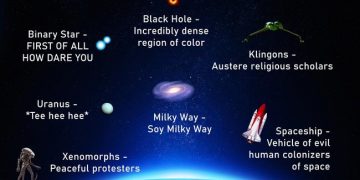 The U.S. space agency said in a statement on Aug. 5 that certain nicknames historically used to refer to distant planets, galaxies, or nebulae that it considers "inappropriate" will no longer be used. Instead, the agency will adopt the official International Astronomical Union designations for the cosmic objects.

"As the scientific community works to identify and address systemic discrimination and inequality in all aspects of the field, it has become clear that certain cosmic nicknames are not only insensitive, but can be actively harmful," the agency said.

For example, what has been known as the "Eskimo Nebula" will now be referred to as NGC 2392.

According to NASA's statement, the world "Eskimo" is "widely viewed as a colonial term with a racist history, imposed on the indigenous people of Arctic regions."

The agency also said it would no longer use the name "Siamese Twins Galaxy," which it deems inappropriate for referring to NGC 4567 and NGC 4568—a pair of spiral galaxies in the Virgo Galaxy Cluster.

"The agency will be working with diversity, inclusion, and equity experts in the astronomical and physical sciences to provide guidance and recommendations for other nicknames and terms for review," it said about its ongoing review.