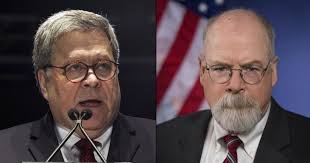 Durham's boss, Attorney General Bill Barr, also pushed back on the notion his hand-picked investigator would defer action. Under Democratic questioning on Capitol Hill last week, he refused to rule out a pre-election release.

"Under oath, do you commit to not releasing any report by Mr. Durham before the November election?" Rep. Debbie Mucarsel-Powell (D-Fla.) asked Barr, citing longstanding Justice Department policy not to announce new developments in politically sensitive cases before an election.

"No," the attorney general curtly replied.

Justice Department policy prohibits prosecutors from taking overt steps in politically charged cases typically within 60 days of an election. Accordingly, Durham would have to make a move by the Friday before Labor Day, or Sept. 4.

A low-profile prosecutor, Durham has kept a tight lid on his investigation into the origins of the specious Russiagate investigation of Donald Trump and his 2016 campaign, leading to rampant speculation about who he might prosecute and whether he would take action ahead of the Nov. 3 presidential election.