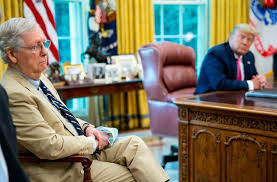 On Wednesday, White House chief of staff Mark Meadows said it was Friday or Trump's way.

On Thursday and Friday Meadows Gave a Hard Line in Coronavirus Talks with Democrats.

Mr. Meadows, joined by Mr. Mnuchin, has met daily with Mrs. Pelosi and Senate Minority Leader Chuck Schumer (D., N.Y.) to hash out differences between a Senate Republican plan totaling $1 trillion and a House Democratic measure that cleared the House in May totaling $3.5 trillion. Late in the week, Democrats proposed a package somewhere around the $2 trillion to $2.5 trillion range, but Republicans rejected it, and talks Friday showed no signs of progress.

The White House has offered concessions from the initial Republican opening bid, such as agreeing to a $400-a-week federal jobless supplement, up from the Senate GOP proposal for an interim $200-a-week supplement before shifting to a program in which the federal assistance, when combined with state aid, would make up 70% of lost wages. Democrats haven't budged on their demand for a $600 weekly federal supplement, or their demand for large-scale aid to states and localities, although they have agreed to shorten the duration of such assistance to lower the cost of their plan.

I believe $400 is a reasonable compromise but it was a no go. Moreover, that compromise might not have passed the Republican Senate.