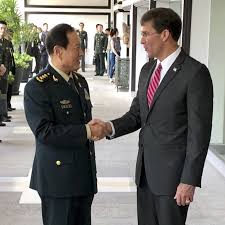 Focused on avoiding conflict in the South China Sea and Taiwan — the latter now expecting "the highest-level visit by a U.S. cabinet official" to Taipei in forty years, namely led by Health and Human Services Secretary Alex Azar — it's the first time the two have talked since March.

"Secretary Esper called for greater PRC [People's Republic of China] transparency on COVID, expressed concern about PRC destabilizing activity in the vicinity of Taiwan and the South China Sea, and called on the PRC to honor international obligations under the principles of the 1984 Sino-British Joint Declaration," a Pentagon press news release said of the talks.

"Secretary Esper communicated the importance that the PRC abide by international laws, rules, and norms, and meet its international commitments."

Further they discussed the following variety of subjects around which the two sides have lately seen tensions:

Esper urged that China "abide by international laws, rules, and norms" in the South China Sea.

China's expansionist claims over the South China Sea were addressed... Esper emphasized the US backs all regional countries whose claims conflict with China's.

The two agreed on a crisis deescalation military hotline.

What's the Conflict Between Greece and Turkey All About?

Calls For Joe Rogan to Moderate Next Debate Intensify --