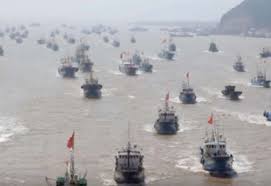 Ecuador said on Wednesday that China has agreed to allow its fishing  vessels to be supervised near the Galapagos Islands, after their presence spurred concerns about possible environmental impacts on the ecologically sensitive region.

The Andean nation last month said it was monitoring some 260 vessels, many of which are Chinese, in an area of international waters between mainland Ecuador and the Galapagos.

The fleet has been arriving in the summer months since 2017 and fishing just outside the Galapagos territorial waters, drawn by marine species such as the endangered hammerhead shark.

"China accepts Ecuador's supervision of Chinese fishing vessels that are at sea," Ecuadorean Foreign Minister Luis Gallegos told a legislative commission, adding that China had agreed to hold bilateral talks about the issue.

Gallegos said Chinese authorities had vowed a policy of "zero tolerance" toward vessels linked to illegal fishing, and the companies that owned those vessels.

He did not give details on what the supervision would involve.

China's embassy in Quito did not answer calls seeking comment.

Ecuador's navy would likely struggle to carry out any significant supervision of the fishing vessels, given that they are spread out over a sprawling area of the Pacific.

Calls For Joe Rogan to Moderate Next Debate Intensify --