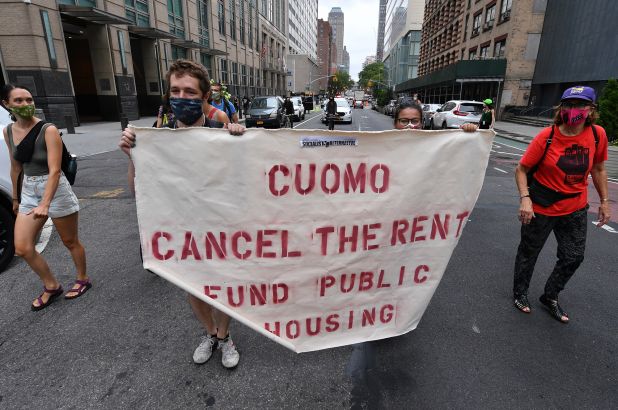 Governor Andrew Cuomo has extended New York's eviction moratorium saying 'there will be no evictions as long as we are in the middle of the epidemic', one day after protesters stormed the Brooklyn offices of landlord attorneys calling for rent to be canceled in the Big Apple.

Cuomo signed the 30-day extension of the executive order Wednesday night, banning landlords from turfing tenants out of their homes through September 4.

This came after dozens of New Yorkers marched through the streets of Brooklyn Wednesday morning before entering two landlord attorney firms buildings and Brooklyn Borough Hall calling for a ban on evictions and cancellation of rent ahead of the residential eviction moratorium's expiration at midnight.

However, New York City Mayor Bill de Blasio appeared to be unaware of the state's extension in his Thursday morning press conference in which he demanded action from Albany and vowed that the city would support residents he claimed now face the threat of eviction.

The governor said he will keep extending it for as long as the coronavirus pandemic continues to ravage the livelihoods of New Yorkers.