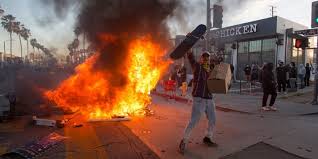 Local police declared a riot on Saturday evening after rioters once again tried to burn down a federal courthouse and launched mortars and fireworks at police officers, several of whom sustained injuries. Similarly destructive unrest has unfolded each night in the city for weeks now, with rampant vandalism, arson, graffiti, and more becoming commonplace as protests over the death of George Floyd morphed into riots over President Trump's controversial decision to send federal officers to Portland.

Yet Portland is by no means the only city gripped by unrest and violence.

Riots have also rocked cities such as Austin, Texas, and Seattle, Washington. In Seattle over the weekend rioters reportedly set fires, vandalized businesses, smashed car windows, and assaulted a court building. NPR reports that 21 police officers were injured while trying to contain the chaos.

And this is just the most recent wave. In May and early June, rioting broke out in cities from Minneapolis, Minnesota to Dallas, Texas.

How it happened: From law professor to high court in 4 years

The Supply Chain Is Broken and Food Shortages Are HERE

What's the Conflict Between Greece and Turkey All About?

Learn How to Program Arduino Boards Today With These Commands