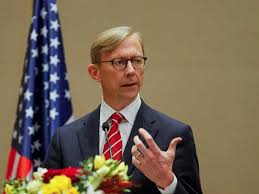 Here's more on that from Reuters, which explains that the timing of Hook's decision is notable, given next week's UN SC vote on an Iranian arms embargo.

Hook's departure comes as the United Nations Security Council prepares to vote next week on a U.S. bid to extend an international arms embargo on Iran. Some diplomats have said the measure lacks support.

Pompeo did not give a reason for Hook's decision to leave. It was not immediately clear when Hook would finish, but the announcement comes at a crucial time for U.S. diplomacy on Iran.

If the United States is unsuccessful in extending the arms embargo on Iran, it has threatened to trigger a return of all U.N. sanctions under a process - known as snapback - agreed in the 2015 nuclear deal between Tehran and world powers.

Ties That Bind Between Iran and Russia