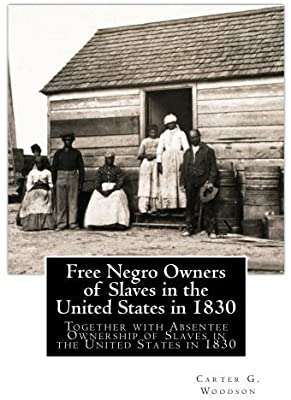 He received his doctorate from Harvard, rose to prominence as a writer and historian, and was the editor of The Journal of Negro History. He is best known for establishing Black History Week, which evolved into Black History Month.

In 1924 Dr. Woodson compiled from the U. S. Census records of 1830 the names and numbers of free Black owners of slaves, listed by State, along with the number of slaves owned by each. The statistics were copied by three assistants under his supervision, personally reviewed by Dr. Woodson, and published in Free Negro Owners of Slaves in the United States in 1830, Together with Absentee Ownership of Slaves in the United States in 1830. (Washington, DC: The Association for the Study of Negro Life and History, 1924.)

Most of the listings are in the South, but there are also listings of free Black owners of slaves in the District of Columbia, Illinois, Maine, New Hampshire, New Jersey, New York, Ohio, Pennsylvania, and Rhode Island. In the North, Pennsylvania had the most number of free Black owners of slaves, numbering twenty-three, with New York and New Jersey next.

In the South, the majority of free Black owners of slaves were to be found in Maryland, Virginia, South Carolina, and Louisiana. In many of these cases, Dr. Woodson says, the ownership was philanthropic, with the free husband purchasing his wife, or the free wife purchasing her husband. In many other cases the land and slave holdings of these free Blacks rivalled those of White planters. In South Carolina there were over six hundred free Black owners of slaves listed, thirty-four of whom were listed as owning over one hundred slaves each, among whom were three owning two hundred or more.

Reparations: Blueprint for a Shakedown

Did U miss yesterday's Liberty Report? Well...that's because YouTube yanked it

Ron Paul has suffered some sort of stroke live on stream