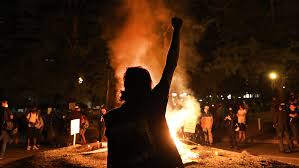 When they were children, their parents refused to tell them "No." Liberal mommy said spanking was wrong, and she coddled her children, obeying their every cry, telling them they were precious snowflakes.

When they were young adults, public school teachers refused to tell them "No." The teachers caved to the increasingly loud demands of the petulant students and gave them what they wanted, failing to enforce any sense of discipline or consequences.

When they were college students, professors and school administrators caved to their insane demands, agreeing to exempt Black students from homework or testing standards, and agreeing to fire staff members who didn't bow down to the demands of the "social justice" class.

Now they're young adults, rioting in the streets, expanding their demands to the point of terrorism and coordinated assaults with explosives and lasers. Their demands have grown exponentially, yet no governor or mayor will stand their ground and tell them, "No!" And liberal society thinks the right answer to all this involves disbanding police so that no one can ever hold the "terror tantrum" class accountable for anything.

We could have stopped them at age six with a spanking.

We could have stopped them at age 15 with a school expulsion.

We could have stopped them at age 20 with principled professors who stood their ground.

We could have stopped them two weeks ago with the simple application of local police. But that was somehow deemed "racist."

Now we're going to have to stop them with force. Otherwise, we will be ruled by a crybully class of screaming sociopaths who destroy everything in their path.

Spare the rod, spoil the child

Now we have an entire generation of spoiled, hyper-privileged, over-coddled, petulant brats who think the whole world answers to their demands. And why should they think any differently when their parents, teachers, professors and government representatives have always surrendered to their belligerent crybully tactics?