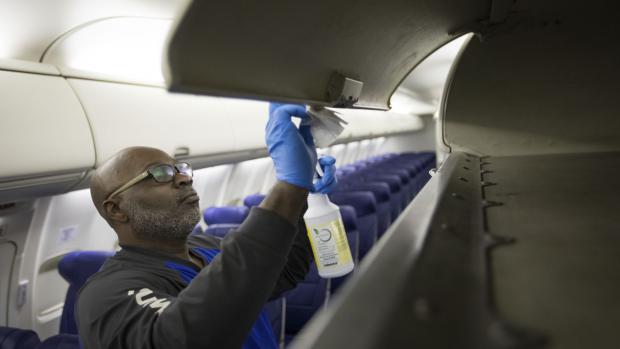 Southwest Airlines is scaling back on COVID-19 cleaning measures and will no longer sanitize seat belts in between flights to speed up turnaround time in between trips.

However, 'high touch' areas including tray tables and lavatories will be disinfected before each takeoff, the company said Monday. Deep cleanings, which take six to seven hours a plane, will continue overnight.

'As our flight schedule evolves, we are returning to standard turnaround time,' a Southwest Airlines memo to flight attendants obtained by CNN said.

The move to cut back on aircraft-cleaning measures was designed to speed up turnaround operations in between flights, which averaged about 47 minutes in March and is now 50 minutes.

Minimizing the time planes spend on the ground between flights is a key part of Southwest's lower-cost business model.

The airline reduced the standard 60-minute turnaround to just 10 minutes in the 1970s, boosting profits, according to The Verge.