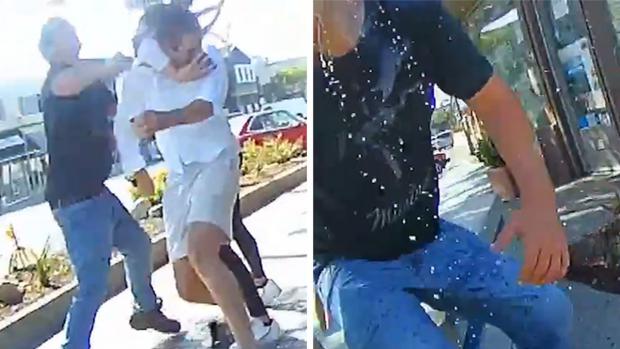 California's new social distancing requirements order people to wear masks in public even when they're outside, especially if they're within six feet of another person. When accosted by the woman, the two men said they didn't believe in masks, and refused when she demanded that they put one on.

According to a report by Fox 11, James Hernandez and his friend Matthew Roy were eating burritos outside while out in public in Manhattan Beach without masks on. They said they had just sat down to eat when a woman - who was walking with her well-dressed boyfriend - stopped and demanded they put their masks on.

Hernanez caught everything that happened next on camera. He wears a bodycam, he says, because he is frequently accosted for being a Trump supporter, and having the stones to wear his Make America Great Again hat in public.

"Y'all need to be wearing masks," the woman can be heard saying.

"No we don't," Hernandez replies. "We're locals here but were on the other side of the fence, we don't believe in this stuff."

"I hadn't even gotten to start eating the burrito yet before someone wanted to give me a mask lecture," Roy said.

"I guess the guy really wanted to impress his girlfriend because I was pretty dismissive, I thought when I turned my back on them they would just move on, but he wanted to stand there and engage me."

The Absolutely Essential Question to Ask Before Consenting to any Vaccination...