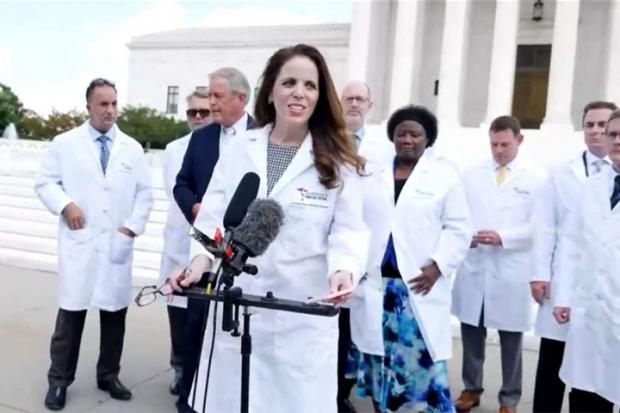 The Vaccine Deep State full-court press began a half-day after the viral video of the Frontline Doctors exploded across the Internet on Monday, July 27, 2020.

To put the Frontline Doctors' video in perspective: It tripled the size of the smash hit "Plandemic" movie viewership in one-eighth the time.

Big Pharma, Bill Gates, and Dr. Anthony Fauci couldn't allow licensed lab coats to torpedo their vaccine-only agenda by extolling the success of hydroxychloroquine (HCQ) in conjunction with zinc and azithromycin. So they called in a few favors to the tech giants, which instantly colluded to censor board-certified medical doctors from across the United States. The next day, Vimeo deleted the video and Squarespace, Inc., the company hosting the Frontline Doctor's website shut it down and the '404' message was found in its place.

How's that for a digital back-alley assault?

Beyond direct leadership at Squarespace, two of the company's board members include the former CEO of Getty Images and the current CFO of Wayfair, which has had an exciting month. Recently, Reddit users accused Wayfair of being a child sex trafficking portal for pedophiles. Naturally, Wayfair denied the crowdsourced research claims and the allegations that exposed many anomalies, such as stealth codes that revealed extreme sticker-shock prices for basic furniture compared to other similar basement price items, with only one (1) in stock. All the benign honeypots for captured children were hidden in plain sight for anyone to search and click. Strange doesn't begin to explain such abnormalities for a publicly-traded company like Wayfair, Inc. (W).

Bottom line: The incestuous tech industry couldn't allow medical doctors to drop truth bombs about HCQ to the American public. Not from the steps of the Supreme Court of the United States (SCOTUS) in Washington, DC. Not during a pandemic, when "all hands on deck" are needed to promote the global event that would be meaningless in any other election year except this one.

No, Google/YouTube and Facebook/Instagram dropped the censor hammers, taking a considerable risk in doing so.

"We look to local health authorities [to guide us on a pandemic], so for example, in the US it would be CDC for guidelines around medical misinformation in a narrow way which could cause harm in the real world."

In other words, the CEO excused Google's censorship by stating that the United States was in a pandemic. He was lockstep with what we are told ad nauseam by mainstream news that only health gatekeepers have the knowledge and expertise to weigh in and give advice on COVID, not licensed medical doctors. Right. Most recently, Forbes published an article titled, "You Must Not 'Do Your Own Research' When It Comes to Science." Now, not only do we have to listen to experts, we are admonished to blindly believe whatever they say.

The irony of Pichai's answer came from President Trump who called out the CDC a couple of weeks ago for "ginning up" and manipulating coronavirus case numbers to make the pandemic look worse. The real shame, however, Congressman Steube missed a chance to press Pichai to name the person who was inside (or outside) of Google's boardroom that made the decision to censor licensed medical doctors. He should have pressed for an answer as to whether agreements were in place between Google and Facebook, Twitter, Vimeo, and Squarespace. That's the $64M question everyone needs to know.

Dr. Simone Gold's group anticipated the censorship issue before their Big Day. Knowing what was coming, they had meetings scheduled to take place the next day on the same SCOTUS steps. Without batting an eye, the Frontline Doctors addressed the censorship head-on with surgical precision, stating they were there for "only the American people" and to represent all the doctors in America in the fight against COVID.

Dr. Simone Gold addressed Google Pichai's lie a day ahead of his answer, saying, "When you get sick, who do you call? Not the CDC. Not the FDA. Not HHS. No, you call your doctor."

Nothing like professional doctors cutting open the belly of the tech beast and not suturing the wound. Google, Facebook, and Twitter's reputations took a severe beating on social media, on The Tucker Carlson Show, and many other places as well.

Dr. Gold and the new American hero, Dr. Stella Immanuel from Cameroon, who has licenses to practice medicine in Nigeria and Texas, decided to come forward and address more than the hydroxychloroquine censorship. They talked about the "climate of fear" that the pandemic had instilled into the minds of millions of people. Fear has permeated their fragile lives, with the lockdown(s) causing more harm than good—a clear detriment to peoples' health. Suicides have skyrocketed compared to years past. Alcoholism and depression zoomed off the charts—both lack of exercise and mask-wearing impact peoples' immune systems. And with little surprise, divorce and domestic abuse have spiked, too. Since Dr. Fauci, the NIH, and the FDA haven't addressed the collateral damage from the lockdown, the Frontline Doctors stepped forward into the healthcare leadership vacuum that Anthony Fauci and Deborah Birx have failed to address.

The unholy duo is more interested in pushing a worthless mask agenda and an untested coronavirus vaccine than dealing with the real suffering of many millions of Americans. It's a shameful, despicable display of arrogance and detachment from reality.

Dr. Stella Immanuel famously said, "We can stop the epidemic in thirty days with hydroxychloroquine," and added, "The United States has 65 million doses."

Because Dr. Immanuel used Twitter to ask Covid-19 survivors who took HCQ to clear the virus to come forward and tell their stories, Twitter suspended Dr. Immanuel's account for six days. Social media won't be the same without her.

YouTube has banned Del Bigtree's weekly show, The HighWire, which covers issues with vaccines and exposes pharma corruption. YouTube deleted all of the channel's content posted over the last several years. Facebook followed suit the next day.

But people are not taking this sitting down. Overlooked by mainstream media, the Association for American Physicians and Surgeons (AAPS) filed a lawsuit in early June against the FDA, its commissioner, and the Biomedical Advanced Research and Development Authority (BARDA). In the suit, AAPS challenged the FDA "to end its arbitrary restrictions on hydroxychloroquine."

Part of the AAPS complaint focused on the announcement that "two million doses of HCQ are being sent by the Trump Administration to Brazil to help medical workers safeguard themselves against the spread of the virus. At the same time, the FDA continues to block Americans' from accessing this medication."

In 2005, Dr. Anthony Fauci was amply aware that HCQ curbs the spread of Bat-SARS and related coronaviruses. The present-day discussion about HCQ isn't news to him. After all, it was the NIH that funded the research study that led to the publication of "Chloroquine is a potent inhibitor of SARS coronavirus infection and spread," by Martin J. Vincent et al.

The conclusion of the study read, in part:

"We report, however, that chloroquine has strong antiviral effects on SARS-CoV infection of primate cells. These inhibitory effects are observed when the cells are treated with the drug either before or after exposure to the virus, suggesting both prophylactic and therapeutic advantage."  [Emphasis ours.]

Why hasn't Dr. Fauci discussed this study? Has he talked about it in any of his daily quotes and video interviews with the mainstream press? Someone who loves the limelight as much as the nearly 80-year-old director of the NIAID should be shouting this important news off the rooftops so he could end the pandemic. He should have joined the Frontline Doctors on the steps of SCOTUS to deliver the message of hope to the American people. Why didn't he do this? Could Anthony Fauci be owned by Big Pharma interests?

"…Waging a 'misinformation campaign' against the drug hydroxychloroquine, claiming the medication has shown consistently encouraging results in treating COVID-19 when used properly."

As AAPS fights the FDA in the court of law, the Frontline Doctors have implored us to pass their message of hope around, bypassing the tech censorship, beating the mainstream press at their concealment game obfuscation.

It's time for the American people to join the Frontline Doctors en masse and win the hydroxychloroquine solution to COVID in the court of public opinion.

Reprinted with permission from James Grundvig/Vaxxter