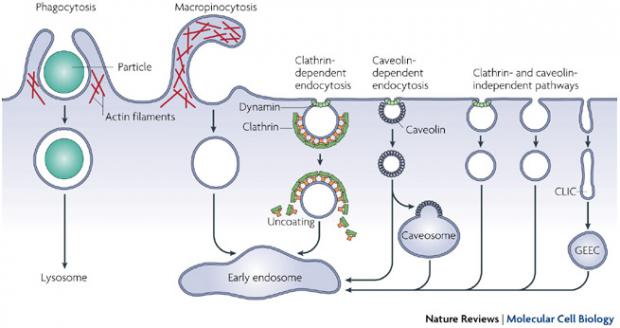 Viruses are the smallest microorganisms in nature. As such, they are obligate parasites, which means that they cannot live or reproduce without a host. Consequently, viruses are found wherever there are living organisms, including humans. The common cold, chicken pox, cold sores, AIDS, and SARS are just a few examples of the diseases that viruses cause. After a virus attaches to its host cell, it must find some way to enter the cell. How have viruses hijacked the cell's pathways to cause infections, and how have scientists learned about endocytosis by studying viral entry pathways?

The Cell's War Against Viruses

As part of our war against viruses, scientists have tried to understand all they can about these tiny, but complex, enemies. We have learned much in the past decades. For example, with the aid of powerful microscopes, genetic tools, and biochemical methods, scientists have discovered that viruses only carry the essential elements necessary for recognizing their host cells and replicating their genome inside the host. However, this economy has a cost. Given their simplicity, viruses are completely dependent on the biosynthetic machinery of the host cell. Therefore, they have developed exquisite tricks to harness the host cell's functions for their own benefit. So to speak, viruses are analogous to an enemy army that will not stop until it conquers the host cell's territory and uses up the host cell's resources.

For example, cells have evolved the endocytic machinery, a complex array of vesicles and proteins, to internalize molecules. In response, some viruses have developed strategies to hijack the cell's endocytic machinery to enter the cell cytoplasm or the nucleus, depending on the replication strategy of the particular virus. The location in which the viral replication cycle takes place is dictated by the type of nucleic acid that makes up the viral genome (either DNA or RNA). The irony is that by studying the mechanisms of viral entry, scientists have gained a greater understanding of the cell's endocytic machinery.

A Stroll Near the Sea, a Starfish Larva, and Some Inquisitive Minds

Cell biologists have been intrigued by endocytosis ever since Ilya Metchnikoff described the phenomenon of phagocytosis, a form of endocytosis that uses vesicles to internalize solid particles. It was December 1882, and Metchnikoff, a thirty-seven-year-old Russian zoologist, was living by the sea on Sicily's northeastern coast. During a stroll along the beach, he collected a minute, transparent starfish larva. He pierced the larva with a thorn from a rose. In response, tiny amoeboid cells covered the thorn in an attempt to ingest the invading menace. Metchnikoff called these defensive cells phagocytes (from the Greek phagein, meaning "to eat" or "to devour") (Figure 1). As it turns out, phagocytes ingest substances both for feeding and as a protective mechanism. After Metchnikoff made his observation, he and other scientists continued to study the protective mechanism, while other researchers focused on understanding and characterizing the mechanisms that govern how cells engulf substances (endocytosis) (Tauber 2003).

In the mid-1950s, several researchers observed that small molecules such as ions, amino acids, and sugars can traverse the plasma membrane through channels or pumps made of integral membrane proteins. In contrast, they learned that large molecules and particles are internalized in vesicles derived from the invagination and pinching-off of segments of the plasma membrane in a process they named endocytosis. Endocytosis also serves as a mechanism to control the protein and lipid (a type of fat) composition of the plasma membrane. Therefore, endocytosis is involved in the regulation of different cellular processes, including mitosis, antigen presentation, cell migration, and many intracellular signaling cascades.

Our modern understanding of endocytosis comes from two important observations made in the 1970s. The first was by Ralph Steinman and his colleagues who used quantitative biochemical and electron microscopy approaches to demonstrate that mammalian cells in culture were able to internalize enormous amounts of the plasma membrane. These scientists made the important observation that most of the membrane that was internalized was later recycled back to the plasma membrane (Steinman, Brodie & Cohn 1976).

I See A Ray Of Light

Coronavirus whistleblower speaks out about possible COVID origin on 'Tucker'

Is There A Flu Shot / COVID Link? - Questions For Corbett

What's the Connection between Sleep and Alzheimer's Disease?

The path to a cure? Scientists discover antibody that 'neutralizes' virus that causes COVID-