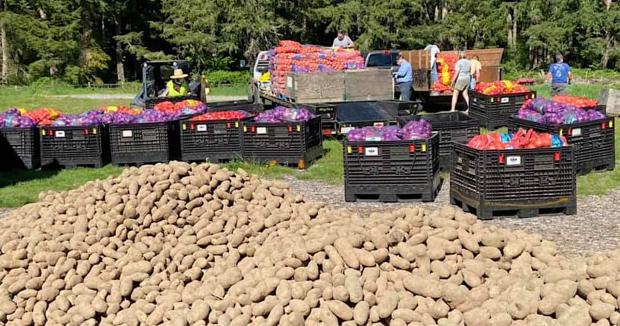 When George Ahearn heard that farmers in Washington state were giving away onions and potatoes they suddenly couldn't sell, his instinct for goodwill led him on a journey that would lead to the rescue of 200 tons of vegetables arriving in food banks to support people in need.

The breakdown of farm supply chains and customers due to COVID-19 shutdowns means crops are destroyed or left to rot—and in rural Washington, farmers knew that if they could get their crops to the food banks in Seattle, it would certainly be preferable.

Inspired by the farmers' plight, Ahearn asked on Facebook to borrow someone's truck or trailer for the day, to haul around 2,000 pounds of restaurant-grade onions and potatoes. The response to his altruistic post was dramatic, and soon 4 trucks and 2 trailers had hauled 9.3 tons of crops grown in the east to feed hungry people in the west.

This voluntary act of kindness grew into a nonprofit organization called EastWest Food Rescue. It has saved over 2.4 million pounds of food from fields, while also amassing enough donations to help compensate farmers for their loss.

"The whole thing started because of COVID," Nancy Balin, one of the people who responded to Ahearn's initial request, told Seattle Times. She now helps direct the program.

"They immediately lost all the restaurant contracts they had for these quality potatoes and onions. And since European countries were shut down, they weren't exporting them because their restaurants were closed."

Beyond Meat Surges On Reports Of Deal With Taco Bell