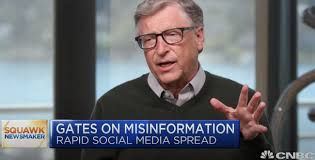 Apparently, Gates failed to grasp that this is exactly the kind of denial that a villainous billionaire might give.

Whether or not you take the Gates-related 'conspiracy theories' seriously, the Microsoft founder clearly sees them as enough of an annoyance that he felt compelled to address the trend again during a Tuesday morning appearance on CNBC.

Responding to a question from interviewer Andrew Ross Sorkin about social media's role in spreading the conspiracies, Gates on Wednesday denied conspiracy theories that accuse the tech mogul and philanthropist of wanting to use coronavirus vaccines to implant tracking devices in people, and also said he hoped that the public's understanding of "the truth" would improve as the world gets closer to a vaccine.

"Very incorrect things that are very titillating...can spread much faster than the truth on social media, and we've always seen that with vaccines....social media can make that even worse...these social media companies can see what is being said on their platform and take things that are absolutely wrong and remove those things from the platform."

"How you divide that up, and draw that line...these are complex issues. It has been a spreader of lot of things...and how do you strike a balance?"