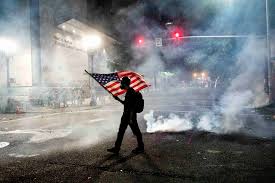 The President cannot save Portland from itself and he should not.

I want a mask mandate, but there is no federal police power for the President to impose it. It must come from governors, who have way more expansive police powers than your average libertarian-leaning person would have you believe.

The President does not have that power.

But, beyond that, the people of Portland have a history of outlandish displays of protest and behavior, including nudity. The place is so bizarre there's been an entire television show parodying Portland.

By sending federal troops to Portland, OR, the President and federal government are allowing Portland not just escape from their own democratic choices, but also allowing them a scapegoat to take the blame.

At some point, we must allow people to live with their choices and make it easy for those who want to escape to actually move. If we allow Portland to fester as it wants, it will either figure out it must change, or live with its consequences.