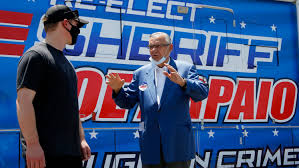 The 88-year-old lawman, who was unseated in the 2016 sheriff's race by a Democratic challenger and was trounced in a 2018 U.S. Senate race, has based much of his campaign around his support for President Donald Trump.

He has vowed to bring back things that the courts have either deemed illegal or his successor has done away with — immigration crackdowns, a complex of jail tents and other now-discarded trademarks.

The winner will go to face Democrat Paul Penzone, who crushed Arpaio in 2016 and is running unopposed in his primary.