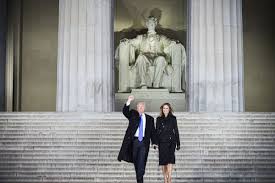 One tweet describes President Donald Trump's campaign as a "criminal enterprise." An ad — with the hashtag #TrumpIsNotWell — shows the president struggling to walk down a ramp, and another mocks the size of the crowd at Trump's rally in Tulsa, Oklahoma, saying, "You've probably heard this before, but it was smaller than we expected."

They're all from a political action group called the Lincoln Project, and according to co-founder Reed Galen, they're meant for one specific audience: Trump himself.

"We have what we call 'an audience of one' strategy, which is clearly aimed at the president," Galen told me.

The Lincoln Project is made up of former Republicans who are avowed "Never Trump" conservatives. The group brought in $16.8 million between April and June of this year, much of which came from donors giving $200 or less. But most of the ads are digital, never reaching television screens.

And a lot of that money has been spent on ads like this one, posted to Twitter following the president's decision to commute the sentence of former campaign associate Roger Stone.

Trump DOMINATED The Debate Leaving Biden Looking WEAK Most Of The Time,