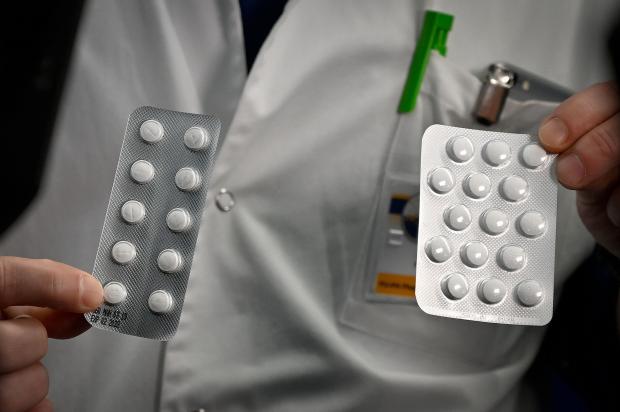 Brazil's president Jair Bolsonaro held his hydroxychloroquine pills aloft like a trophy last night as he rallied with a crowd of supporters despite his coronavirus infection.

Bolsonaro greeted his fans outside the presidential palace in Brasilia where he has been in quarantine since announcing his positive test result on July 7.

Supporters cheered as Bolsonaro showed off the unproven anti-malaria drug which he claims is making him better, before removing his mask to tell the crowd that 'the pandemic was unfortunate, but we will overcome it'.

While Bolsonaro kept his distance from across a stream, his supporters were packed on the waterside in spite of social distancing rules which he has repeatedly scorned.

The 65-year-old former army captain has raged against lockdowns despite the country's enormous death toll, after dismissing the virus as a 'little flu'.

Bolsonaro announced on Wednesday that he was still positive for the virus, but says he is not experiencing symptoms and credits his good health to hydroxychloroquine.

'I am not recommending anything. I recommend that you talk to your doctor. In my case, a military doctor recommended hydroxychloroquine, and it worked,' he said.

Like Donald Trump, Bolsonaro has touted hydroxychloroquine as a treatment for Covid-19 but its effectiveness against the disease has not been proven.