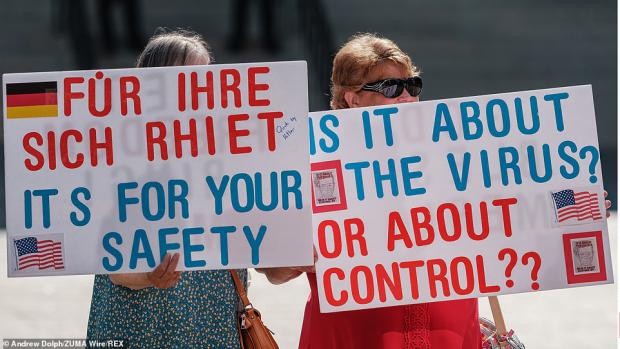 Armed anti-mask protesters gathered outside the Ohio statehouse on Saturday for a 'civil disobedience rally' guarded by armed militia and military veterans.

Ohio does not yet have a statewide mandate on wearing masks but several groups converged Saturday afternoon to push back on the requirements already introduced in several counties.

Hundreds of maskless people crowded together outside the courthouse in Columbus to voice their anger, claiming a requirement for face coverings is an overreach by local officials.

Nearby, Black Lives Matter and civil rights activists held their own protest.

No violence was reported between the different groups of protesters but the atmosphere was described as tense.

Pictures from the protest showed that police were forced to detain one person following a physical altercation between far-right protesters from two different groups.

A member of the Boogaloo Movement wearing a Hawaiian shirt was pictured attempting to strike members of the Proud Boys before police officers took him away.

The first protest to kick off was the Stand for Freedom Ohio rally which saw hundreds of attendees collect to stand against mask mandates.