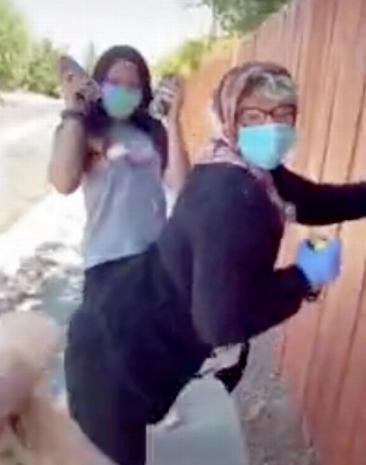 Teenage TikTok users are masquerading as face mask-wearing senior citizens to buy alcohol without being asked for ID in a new viral trend.

Videos posted to the social media app show teens across the US putting white powder in their hair and changing their clothes to make themselves appear older before heading out to the liquor store with friends.

Taking advantage of the current coronavirus crisis, the under-age shoppers add a face mask to the look in order to cover up their youthful complexions - while one even thought to wear medical gloves, not to protect herself and others, but rather to further conceal her age.

Posts of the 'pranks' have gone viral, with one video racking up more than two million views.

One 18-year-old user revealed she put baby powder in her hair to make it appear grayer before wrapping the remaining strands in a scarf to give herself a more matronly appearance.

Adding sunglasses for good measure, she walked into a store and came out holding a bottle of wine. In the video she admits she is 'shaking' from the excitement.

Asked what she would have done if she had been asked for ID, she replied: 'I would have said I had forgotten it in the car and left the store.'

Take a look at this: Staring into someone's eyes for 10 minutes can cause hallucinations...