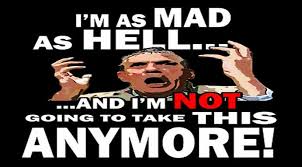 The film, which starred Faye Dunaway, William Holden, and the late Peter Finch as the enraged newscaster, Howard Beale, won four Oscars, including a best actor prize for Finch, whose Beale character was the forerunner of every fuming cable TV pundit from Bill O'Reilly to Keith Olbermann to Glenn Beck to Rachel Maddow to, latterly, Tucker Carlson, expatiating on behalf of the American public.

Here's the speech, which might have been written yesterday by a conservative, but 44 years ago was the authentic voice of a Hollywood liberal:

"I don't have to tell you things are bad. Everybody knows things are bad. It's a depression. Everybody's out of work or scared of losing their job. The dollar buys a nickel's worth. Banks are going bust. Shopkeepers keep a gun under the counter. Punks are running wild in the street and there's nobody anywhere that seems to know what to do with us. There's no end to it.

"We know the air is unfit to breathe, our food is unfit to eat, and we sit watching our TVs while some local newscaster tells us that today we had 15 homicides and 63 violent crimes as if that's the way it's supposed to be. We know things are bad. Worse than bad. They're crazy. It's like everything everywhere is going crazy so we don't go out anymore. We sit in a house as slowly the world we're living in is getting smaller and all we say is, "Please, at least leave us alone in our living rooms…

"I want you to get up right now. Get up. Go to your windows, open your windows, and stick your head out, and yell, 'I'm as mad as hell and I'm not going to take this anymore!'"

Welcome to 2020, the year in which what was once fanciful is now practically reality.