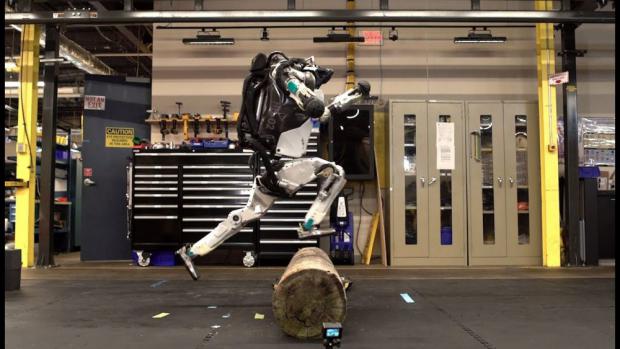 Robots have always had certain advantages over humans. They're typically made of more durable materials than the soft tissue covering human bodies and since they can be repaired in the event of damage, they can basically "live" forever. But robots are usually clunky and clumsy, and humans have always had a huge advantage in terms of dexterity.

Thanks to the mad scientists at Boston Dynamics, that appears to be changing. The humanoid Atlas robot, which has already demonstrated incredibly impressive human-like abilities, just keeps getting better and better, and a new video by the company shows that its fluidity of movement has now easily surpassed your own (and mine).

Atlas has slowly but surely been learning a lot of new skills over the past few years. It's graduated from holding boxes and awkwardly walking to sprinting over obstacles and navigating all manner of difficult terrain.

This latest demonstration is an evolution of those skills, with the robot showcasing its ability to tumble, spin in the air, and even do a respectable handstand. It's essentially a full-fledged gymnastics routine being performed by a robot. Whether that's awesome or scary depends on your point of view.

Alexa, have a heart! British company develops artificial voice that can speak with...

The Seven-Step Path from Pandemic to Totalitarianism

Economic Nightmare: Nearly 50 Percent Of All The Jobs Lost During The COVID-19 Pandemic...

Mysterious cloud over 1,000 MILES long reappears on Mars over a large volcano near...

Kodak CEO admits he bought thousands of shares in the fallen photo firm AFTER taking part...

A Time That Tries Men's Souls

Why Are There so Few Female CEOs?