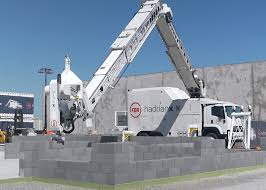 We are now seeing what this type of machine can bring to the real world, with the robot completing the walls of its first display home as part of residential development in Western Australia.

The Hadrian X robot is the handiwork of Australia firm Fastbrick Robotics (FBR), and lays its bricks by way of a telescopic boom that mounts to an excavator or truck. By feeding the system a 3D CAD model of a house, the robot can then go to work placing bricks, along with the mortar and adhesive needed to hold it all together.

Not too long ago, the Hadrian X was capable of laying around 85 blocks an hour, but the team has made significant improvements to its control software that first saw that rate jump to 150 blocks an hour, and then last month to more than 200. This was considered a demonstration of the skills needed to compete with traditional bricklaying services, and now the team is seeing how its machine fares as part of a real-world construction team.

The company deployed the Hadrian X to the site of a display home, which will feature as part of a residential housing development in the town of Dayton. Here it completed the structural walls of the display home in three and a half standard bricklaying shifts, according to the team, and has now retreated to base to allow human builders to take the reins.

Once complete, the home will serve as a display for the public and potential partners to visit and learn more about the Hadrian X's bricklaying capabilities and automated construction. The company plans to continue improving the technology to boost its performance even further.

Food Prices Rise To Dangerous Levels As "A Second Wave Of Layoffs" Hits The U.S. Economy

Owen Benjamin vs. Patreon lawsuit, what are the possible implications?

Over 80% Of Black Americans Don't Want To 'Abolish Police'

Association Of American Physicians And Surgeons Sounds Off On Face Masks