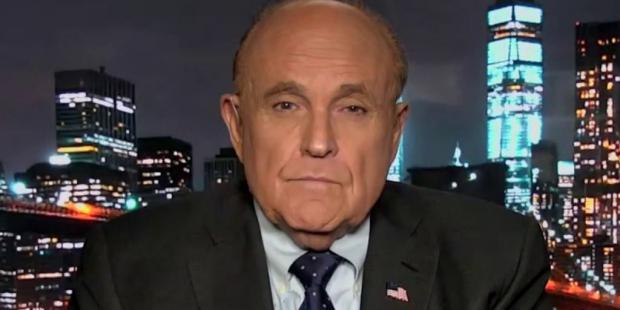 Rudy Giuliani has slammed New York Mayor Bill De Blasio's commission of a Black Lives Matter mural outside Trump Tower and accused the group of being a terror organization.

'Black Lives Matter is an organization run by three Marxists and financed by a convicted terrorist – who I happened to have convicted, who got 58 years in jail and got a corrupt pardon from Bill Clinton,' Donald Trump's lawyer Giuliani said on Hannity on Friday.

Black Lives Matter is an organized movement that advocates for non-violent civil disobedience to protest police brutality against African-American people.

The movement started with the use of the hashtag #BlackLivesMatter on social media following the acquittal of George Zimmerman in the shooting death of black teen Trayvon Martin in February 2012. It has regained traction following the brutal police killing of George Floyd in Minneapolis on May 25.

The three founders of the movement and hashtag are activists Alicia Garza, Patrisse Cullors and Opal Tometi, who have expanded the project into a national network of over 30 local chapter between 2014 and 2016.

BLM is a network run by umbrella organization Thousand Currents, which radical activist Susan Rosenberg serves as Vice Chair of the Board of Directors.

Black Lives Matter and Thousand Currents is yet to reply to DailyMail.com's request for comment.