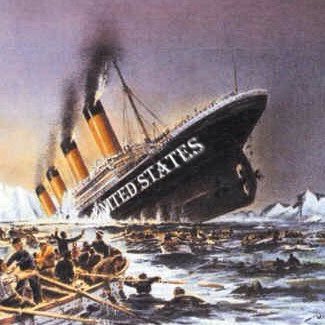 On April 14, 1912, the liner Titanic, considered unsinkable due to its watertight compartments and other features, struck a glancing blow against a massive iceberg on that moonless, weirdly calm night. In the early hours of April 15, the great ship broke in half and sank, ending the lives of the majority of its passengers and crew.

The usual analogy drawn between the Titanic and our financial meltdown stems from the initial complacency of the passengers after the collision. Some passengers went on deck to play with the ice scraped off the berg, while most returned to the festivities still working their magic as midnight approached.

The class structure of Edwardian Britain soon came into play, however; as the situation grew visibly threatening, the First Class passengers were herded into the few lifeboats while the steerage/Third Class passengers--many of them immigrants--were mostly kept below decks, sealing their doom.

But there are even more compelling analogies than initial complacency turning to panic.

Escape From New York: Wealthy Residents Flee In Droves As The City Degenerates Into A Hellhole

Paying the Price for the Free Stimulus Money