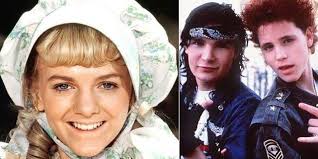 While fame and fortune are an ever-enticing dream, few things seem less appealing than being a child star, and HBO's Showbiz Kids (premiering July 14) certainly reinforces that feeling. Awash in anecdotes about the ways in which the industry—and the attendant hunger for the spotlight that consumes both children and parents—warps, alienates and exploits kids, it's a documentary which illustrates that, sometimes, being nobody is far healthier, and more fulfilling, than being well-known.

Sexual misconduct is the dark cloud hovering over Showbiz Kids, and it comes to the fore when former Diff'rent Strokes star Todd Bridges recalls being molested as a child—a disclosure that, according to Evan Rachel Wood, isn't unique, as she claims, "In my experience, I know a lot of kids that grew up in the industry. And what surprised me when I got older was finding out that pretty much all of the young men were abused in some way, sexually." She then relays that, at a recent Golden Globes gala, she watched a pedophile (whom she doesn't name) win an award, and had to walk out because she was so disgusted by the praise being lavished upon this monster. As she departed, she thought to herself, "I don't know if I can do this anymore. I can't keep watching this happen. I don't know how to handle this. This has to stop."

Gates Tries to Justify Side Effects of Fast-Tracked Vaccine

The Importance of Resistance to Government Ordered Mask-Wearing

The Voluntary End of America Due to a Coronavirus Hoax

Republicans Aid Kanye West's Bid to Get on the 2020 Ballot

BREAKING: Aerial footage of Beirut after the explosion