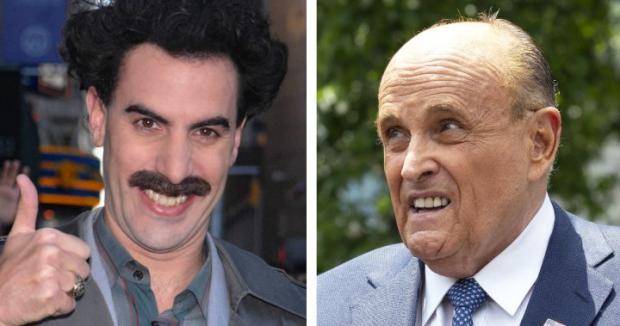 The former mayor and personal attorney to President Trump went to the Mark Hotel on Tuesday for what he thought was a serious interview about the administration's response to COVID-19. He said he was offered payment for the interview, and asked that the money be donated to the Stephen Siller Tunnel to Towers Foundation.

A female interviewer began the conversation in a room fitted out with a professional set-up of lights and camera with a few softball questions before, as Giuliani tells us, "This guy comes running in, wearing a crazy, what I would say was a pink transgender outfit.

"It was a pink bikini, with lace, underneath a translucent mesh top, it looked absurd. He had the beard, bare legs, and wasn't what I would call distractingly attractive."

Giuliani, 76, said he didn't immediately recognize the gate-crasher as Cohen: "This person comes in yelling and screaming, and I thought this must be a scam or a shake-down, so I reported it to the police. He then ran away."

Bear back wrestling! Moment pair of cubs sneak into back yard to do battle in paddling pool...

'I'm an annihilator... I'm the greatest fighter since the conception of God': Mike T

Kenya's elephants more than double in the past three decades as the country claims...

Twin sisters who married identical brothers in a joint wedding (and now live in the same home)...

Mars from above: NASA shares photos of the Red Planet captured by its Reconnaissance Orbiter...

US scientists are MAKING a strain of coronavirus to INFECT healthy volunteers...

Donald Trump hints at FIRING his FBI director Chris Wray over claims he is covering up misconduct...

Golfer eliminated from US Amateur after his caddie gets into the bunker to test the texture...

Fortnite maker Epic targets Apple and Google with antitrust lawsuits and accuses them...