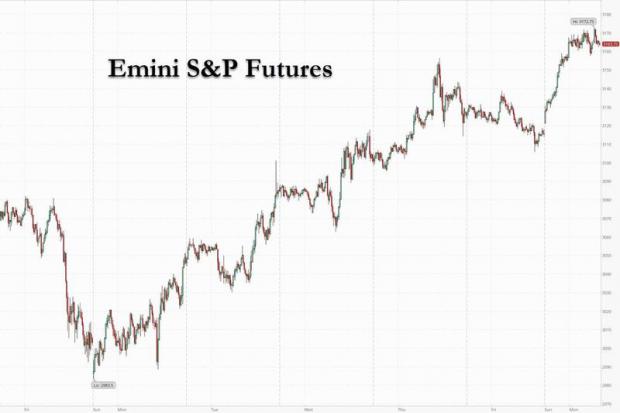 Similar to the Robinhood euphoria that has gripped millions of Gen-Z'ers and Millennials in the US, Chinese social media exploded with searches for the term "open a stock account." The result: Monday saw the biggest one day jump in the Shanghai Composite in 5 years, which closed up 5.7%, the most since 2015.

That however has not tempered retail investor enthusiasm, in fact quite the opposite and is also evident in China's convertible bond market, where deals are seven times more competitive than last year. One note was so popular it was 170,600 times oversubscribed, the most since at least 2007.

Indeed, as history has repeatedly shown, such momentum-fueled rallies in China tend to accelerate as the fear of missing out grows, posing challenges for officials as they seek to limit speculation - especially when there's plenty of liquidity looking for returns within the nation's capital-controlled borders.

As Bloomberg cautions, the pace of recent Chinese gains matches the market's melt-up that started in the final weeks of 2014: The CSI 300 Index has now added 14% in five days, the most since December that year. A gauge of momentum on the CSI 300 is also the strongest since late 2014. Shares of brokerages surged as daily turnover exceeded 1.5 trillion yuan ($213 billion) for the first time since 2015, indicating increasing participation from retail investors. Monday's more-than-5% gain in stocks had only happened once before since the bubble burst.

US War on Chinese Enterprises