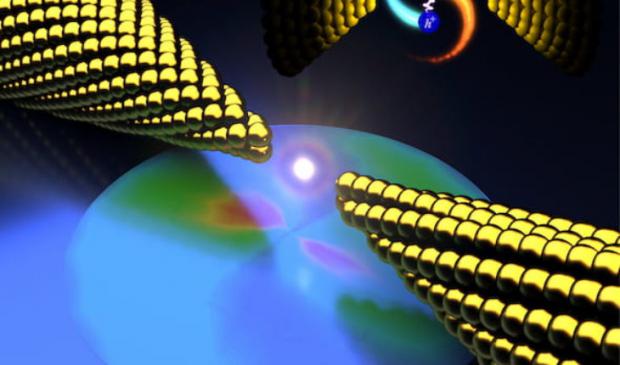 Hot electrons were created by electrons driven to tunnel between gold electrodes, their recombination with holes emitted bright light, and the greater the input voltage, the brighter the light.

This could be useful for applications in optoelectronics, quantum optics and photocatalysis.

The effect depends upon the metal's plasmons, ripples of energy that flow across its surface.

Researchers formed several metals into microscopic, bow tie-shaped electrodes with nanogaps, a test bed developed by the lab that lets them perform simultaneous electron transport and optical spectroscopy. Gold was the best performer among electrodes they tried, including compounds with plasmon-damping chromium and palladium chosen to help define the plasmons' part in the phenomenon.

"If the plasmons' only role is to help couple the light out, then the difference between working with gold and something like palladium might be a factor of 20 or 50," Natelson said. "The fact that it's a factor of 10,000 tells you that something different is going on."

The reason appears to be that plasmons decay "almost immediately" into hot electrons and holes, he said. "That continuous churning, using current to kick the material into generating more electrons and holes, gives us this steady-state hot distribution of carriers, and we've been able to maintain it for minutes at a time," Natelson said.

Rep. Jordan: 'Are We Going to Make America Great Again?