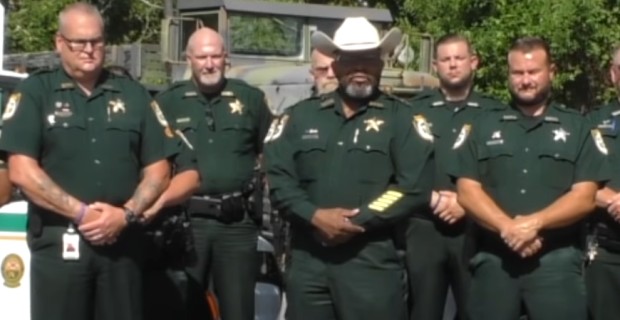 A Sheriff in Clay County, Florida has threatened to deputize gun owners against Black Lives Matter protesters if they try to impose "lawlessness" by overwhelming local police forces.

He then called out Black Lives Matter directly, noting that God was completely absent from their message and that they had made a "spectacle" of "disrupting what we know to be our quality of life in this country."

Daniels then explicitly warned that legal gun owners would be mobilized to help police if BLM agitators tried to take over the area, as they did for weeks in a downtown area of Seattle.

"If we can't handle you, I'll exercise the power and authority as the sheriff, and I'll make special deputies of every lawful gun owner in this county and I'll deputize them for this one purpose to stand in the gap between lawlessness and civility," said Daniels, adding "You've been warned."

Looks like the infamous Missouri couple who pointed guns at BLM demonstrators to protect their property should consider moving to Clay County.

Chinese National Arrested Illegally Entering The US With Over $28,000 Worth Of Gold Bars

"I Started A Local Gun And Preparedness Club... And Leftists Tried To Interfere"

Attack of the Corona Karens