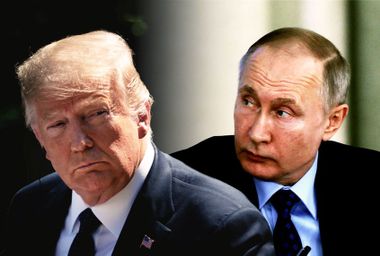 "Lawmakers from both U.S. political parties demanded President Donald Trump hold Russia accountable over allegations it offered cash bounties for the killing of American troops. Trump has denied reports by several major news organizations that he was briefed on the matter; he has not demanded an investigation of the allegations; and he has yet to even threaten Moscow with retaliation should the reporting be confirmed. Trump's lack of action has reignited concerns that the Republican is more interested in maintaining cordial relations with Vladimir Putin than defending American interests—including its troops."

Notice all the innuendos in this dishonest report:  "Trump has denied," "he has not demanded an investigation," "he has yet to even threaten moscow," 'Trump's lack of action," "more interested in cordial relations with putin than defending American troops."

The claim iitself is so absurd that it indicates the media regard Americans as completely stupid. The US and Taliban have been killing each other since October 2001 when the Cheney/Bush regime illegally attacked Afghanistan. For 19 years the Taliban has known who its enemy is and does not need Russian bribes to kill US occupiers.

To me, it is extraordinary that the New York Times and the proprietor of Bloomberg News are so devoid of integrity that they make up out of thin air false allegations for the sole purpose of convincing Americans that their president is a Russian agent more concerned with getting along with Putin than protecting US soldiers.  This latest lie from NYTimes/Bloomberg is an effort to resurrect the Russiagate hoax.

How Much Longer Must We Suffer The Liberal Media's "Fake Pandemic?"

Ep. 1313 Why is the Media Hiding This Bombshell?

How many people REALLY die from the coronavirus? Italian research suggests...

Checkpoints will be set up at New York City's tunnels and bridges to trace travelers...