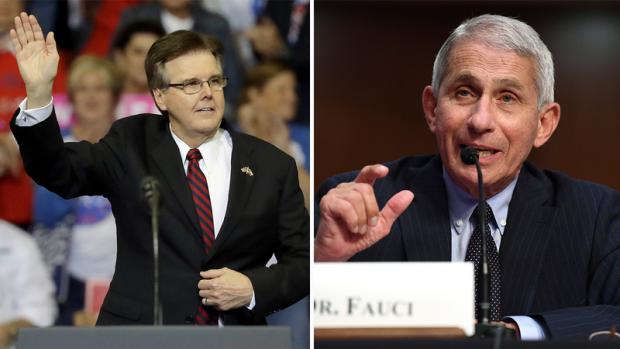 "Fauci said that he's concerned about states like Texas that skipped over certain things. He doesn't know what he's talking about," Patrick said on Fox News after Fauci testified before a Senate committee about the U.S. response to the coronavirus outbreak. "We haven't skipped over anything."

"The only thing I'm skipping over is listening to him," Patrick added. "He has been wrong every time, on every issue. I don't need his advice anymore. We'll listen to a lot of science, we'll listen to a lot of doctors, and [Gov. Greg Abbott (R)], myself and other state leaders will make the decision. No thank you, Dr. Fauci."

Patrick made the comments the same day that Texas reported nearly 7,000 new cases of COVID-19, representing a new high in a state that has seen a consistent rise in infections for weeks now. The uptick in cases caused Abbott last week to pause the state's reopening and order bars to close their doors.

While speaking before Congress on Tuesday, Fauci said that he is "quite concerned" about the rise of infections in states like Texas, Florida, California and Arizona. He noted that the states represented about 50 percent of the country's new infections and suggested that states "skipping over" some reopening guidelines may have played a factor.