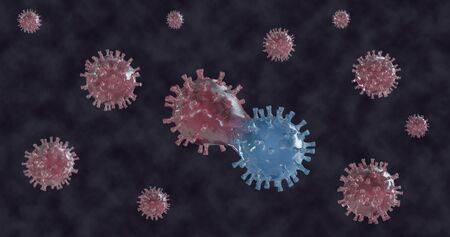 At this point, scientists around the world have examined hundreds of thousands of viral samples from around the world. They've compared and contrasted their genetic code, and they've identified what appears to be an important pattern. That is: the earliest version of the virus that spread in Wuhan is not genetically identical to the iteration that went on to conquer Europe and the US.

According to a Bloomberg report comparing the findings from four non-peer-reviewed studies, it appears that a notable mutation of the virus that emerged broadly and early during its global campaign helped render COVID-19 more infectious in later iterations than it was during the early weeks of the outbreak, raising fears that the virus could continue to evolve in a way that eludes scientists working on a vaccine, or simply makes the virus more deadly.

At least four laboratory experiments suggest that the mutation makes the virus more infectious, although none of that work has been peer-reviewed. Another unpublished study led by scientists at Los Alamos National Laboratory asserts that patients with the G variant actually have more virus in their bodies, making them more likely to spread it to others.

The mutation doesn't appear to make people sicker, but a growing number of scientists worry that it has made the virus more contagious.

"The epidemiological study and our data together really explain why the [G variant's] spread in Europe and the U.S. was really fast," said Hyeryun Choe, a virologist at Scripps Research and a lead author of an unpublished study on the G variant's enhanced infectiousness in laboratory cell cultures. "This is not just accidental."

In Sweden, Where There Was No Lockdown, COVID Cases & Deaths Have Slowed to a Trickle