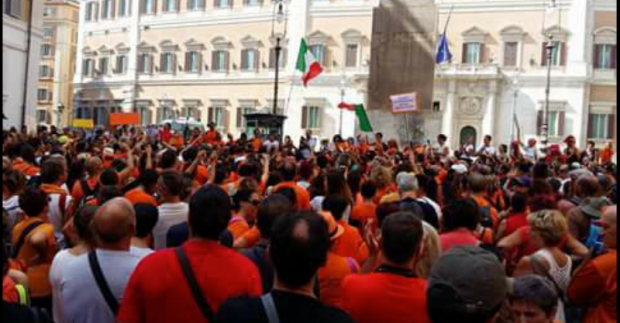 I don't know if you are completely aware of the Italian situation. Summarizing everything in a few words, Italy was sold to Big Pharma and has become a huge laboratory where experiments are carried out on the population: adults, children, old, healthy, sick people … it makes no difference, we are all guinea pigs. Now the business, and not just an economic one, is to force 60 million Italians to get vaccinated against COVID, so much so that tens of millions of doses of a product have already been purchased, a product that, in fact, is unknown both in terms of effectiveness and, above all, in terms of side effects. In the meantime, while waiting to receive the goods, a law is being passed according to which everyone, including children, must be vaccinated against the flu (why?), and this in addition to the 10 vaccines that are already mandatory.

As if that were not enough, many personal freedoms, although guaranteed by the Constitution, have been brutally canceled.

As you know, for years we have been analyzing vaccines, finding them always dangerously polluted and we are contacted daily by families of children damaged by vaccines.

Now, in our parliament there is no longer any difference between majority and opposition and, if the situation remains that of today, we will have no escape.

For some months, a group of highly educated people has formed a political party called MOVIMENTO 3 V (Movement We Want the Truth about Vaccines). Neither Stefano nor I are members of the party but we have been asked to help them from a scientific point of view, and this is what we are doing.

We would all be very grateful if you could inform your people of what is happening in Italy and if you could write an appeal to encourage the Italians to support the party which, at the present time, is the only possibility of making a voice heard that is different from that of the regime.

Thank you very much and best regards,

P.S. During the lockdown we had no "sudden infant death Syndromes". After the lockdown, baby vaccination started again  and we had a dead baby in Turin and another child in two twins died and the girl survived but she is an emergency therapy.

Eviction Looms for Millions of Americans Who Can't Afford Rent

Divide And Conquer Is The REAL Agenda! Is Ghislaine Maxwell Married?!

Everyone looks to Twetch as Twitter experiences massive hack

The COVID-19 Curve Has Been Flattened